Local newspapers are credible, trustworthy sources of community news on issues that affect their daily lives. During the pandemic, despite declining revenues, newspapers provided essential COVID-19 and wildfire coverage at no cost, in front of paywalls. Additionally, they hold the powerful accountable, and give voice on issues that would otherwise not be heard. The relentless pursuit of truth reflects an unwavering commitment to serve local communities.

Unfortunately, the state of the news industry is at risk. Without help from the legislature, local newspapers may close their doors, and newspaper carriers will lose their jobs at the beginning of next year.  Help your community newspaper survive. 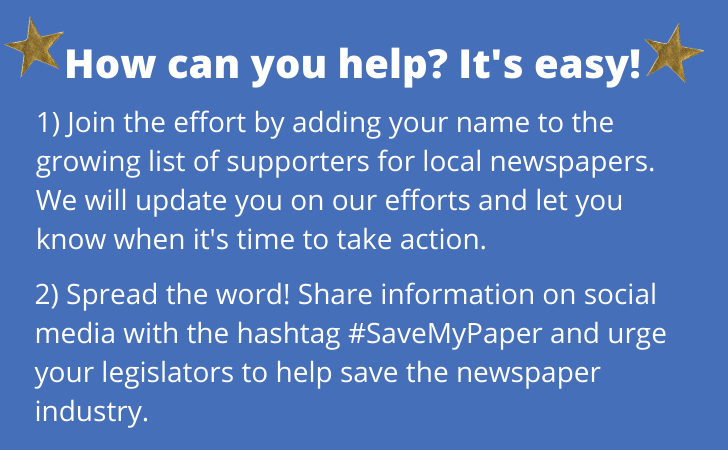 ★ Add your name to the growing list of supporters of local newspapers. ★

WHAT IS HAPPENING TO LOCAL NEWSPAPERS AND CARRIERS?

☞ The newspaper carrier exemption to AB 5 ends this year, and without legislative support journalists, photographers, printers, designers, freelance writers, carriers, and others may be left unemployed.

☞ Distribution costs will increase up to 50%.

☞ Over 38% of newsrooms across the state will consider closing their doors forever.

☞ Local newspapers, including local, ethnic, urban, suburban and metro papers, will be unable to sustain operations. They will close their doors, leaving many communities with no local news source.

☞ For those that continue to exist, news operations will be forced to make deep cuts to both print and digital community coverage and offerings in order to survive.

IF NEWSPAPERS DO NOT RECEIVE AN EXEMPTION, MANY READERS WILL LOSE:

☞ The voice of a free media, a cherished institution enshrined in the U.S. Constitution.

WHY IS THIS HAPPENING?

The newspaper industry is experiencing a series of unprecedented threats that will ultimately affect readers:

For more information on how you can help contact Brittney Barsotti at 916-288-6006 or [email protected].

“Americans often take our free media for granted, assuming it will always be there to serve us — and it has been, especially during the pandemic. Newsrooms are working around-the-clock to provide readers with the latest information on how and where the virus is spreading and what health experts are recommending to protect the public. But their economic crisis reminds us that just as any other Main Street company, newspapers must also keep the lights on and the doors open.”

Op-Ed
More than 50 years have passed since President Lyndon Johnson heralded ethnic newspapers for their role in building American unity. “Your publications represent one of the most American of all our American institutions,” Johnson told a roomful of publishers in the East Room of the White House.
Read More

Op-Ed
A brand management and crisis communication professor I know at a leading university contends that brands reside in the minds of customers, not at company headquarters. So, when crisis strikes, he argues, protecting the brand boils down to this: protecting your customers.
Read More

Monterey County Weekly: As newspapers face unprecedented challenges, the state legislature has a chance to extend a lifeline.

Op-Ed
The California Legislature is wrapping up the 2019-2020 legislative session at the end of this month, making decisions in what is one of the most challenging periods in recent history.
Read More

Op-Ed
In this moment of reckoning with systemic racial injustice, our country’s ethnic media outlets are serving an important role that mainstream media alone cannot fill. Throughout the years, these outlets have spoken for marginalized and vulnerable communities, serving to improve civic engagement and support cross-cultural communication within American society.
Read More

The Mercury News: Opinion: Newspapers are essential for our recovery, and they need help

Op-Ed
The personal and economic toll of the pandemic is painfully clear. Tragically, we have lost more than 100,000 Americans, and many businesses have eliminated jobs. Local newspapers have kept citizens and consumers informed throughout the crisis, but these outlets also suffered due to COVID-19 and need support to continue to provide valuable information in these uncertain times.
Read More

Op-Ed
I support local journalism because the Constitution demands a free press to protect our democracy. That sounds very big and conceptual, so let me break it down to what I understand and why I care. My career inside local government has taken me to four great cities — Palo Alto, Boulder, Ventura, and Santa Barbara. The common thread between these diverse cities is an enlightened populace that actively participates in their city government. In other words, cities work and communities thrive when the people control local government, never the other way around. “Of the people, by the people, for the people” means we are accountable to ourselves, as Santa Barbarans and Americans, for building a great community.
Read More

Op-Ed
We are living in a time when accessible, accurate information is extraordinarily important. Local news outlets are foundational to that purpose. They illuminate the details of a protest movement determined to overwhelm historic oppression. They provide critical updates and context about a deadly pandemic that’s transformed how we live. Local news outlets reflect change. And they effect change as well.
Read More

Los Angeles Times: Editorial: Local newspapers are dying. Here’s how we can save them

Op-Ed
Last month, the Baltimore Sun won a Pulitzer Prize for local reporting for uncovering a scheme in which the mayor of Baltimore sold thousands of copies (in some cases, nonexistent copies) of a children’s book she had self-published to Maryland’s flagship hospital network, which she helped oversee. The mayor resigned.
Read More

The Sacramento Bee: Steinberg to judge: The Bee needs to ‘be bolstered and rebuilt, not milked’

Op-Ed
For nearly as long as there has been a city of Sacramento, journalists from The Sacramento Bee have been keeping a watchful eye on what we do inside City Hall. In my current job as mayor of Sacramento, and in my former role as President Pro Tem of the California State Senate, I have experienced firsthand the paper’s important role in exposing local and state officials who don’t sufficiently safeguard the public treasury or the public trust.
Read More
1 2 Next »

For more information on how you can help contact Brittney Barsotti at 916-288-6006 or [email protected].